The Intergovernmental Panel on Climate Change released a report today that is grabbing the headlines. The report basically concludes that mankind’s current activities will lead to catastrophic climate change. But is there really a climate crisis underway? 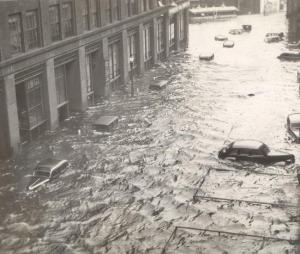 AP Photo: Providence Rhode Island in 1938. Are storms really worse than they used to be? Or do we suffer from climate amnesia?

I would like to add a little additional context to the climate debate from a different perspective – the discipline of the archaeology.

In his 2003 book, Looking Beneath the Surface: The Story of Archaeology in New Jersey, R. Alan Mounier says that, “About 11,000 years ago the sea stood as much as 262 feet below its present level, and the shoreline lay as much as 100 miles to the east of its current position (Edwards and Emery 1977).”

So you see people the oceans have been rising for a very, very long time. This is not a new phenomenon. When we build along our coasts it is always at our own peril.

“Environmental conditions in the (U.S.) Southwest are extremely variable in terms of both place and time. By this I mean that there are not only marked seasonal changes that play out over decades, centuries, and millennia. Readers should keep in mind that irrespective of similarities in temperatures and rainfall patterns, the environment that we experience today is not the same environment that pre-Hispanic people experienced. Over the past millennia many water sources have dried up, arroyos have been cut, and much of the naturally occurring flora and fauna have disappeared. The last few thousand years have been subject to general and consistent climatic patterns, but we need to be sensitive to the existence of some highly erratic and severe periods that acutely affected the choices available to indigenous people.” Before Santa Fe: Archaeology of the City Different, by Jason S. Shapiro, Museum of New Mexico Press, Santa Fe, 2008, p. 6.

And while the climate always changes, whether it be from natural or man-made forces, it will present challenges, but it will also bring new opportunities as it did in the past:

“Eventually the persistent warming trends associated with the Altithermal caused even more noticeable changes throughout the Southwest. The new opportunities associated with different plant and animal foods, as well as the techniques needed to collect, process, and store them, became integral to the next cultural period that we will examine, the Archaic.” Before Santa Fe: Archaeology of the City Different, p.47.

Don’t believe the doom and gloom hype coming from the IPCC. If we take a rational approach to the changing climate we will be far better off than if we act out of fear. The fear-based approach will cost us far more in lives and wealth than a rational approach. Technology and economic freedom will solve our problems, not fear mongering and coercive governing which seeks to mold human behavior and raise the price of the energy that heats our homes, powers our hospitals, produces and delivers our food, etc. The Kerry-Obama-IPCC-AlGore approach is based on false assumptions – the IPCC climate models did not predicted the lack of warming over the last approx. 17 years or so. The climate does not seem to be as sensitive to CO2 as we have been led to believe. There is no crisis. Stop the nonsense IPCC!