Democratic Party  – the self-anointed party of “Diversity”? Which looks more diverse to you? 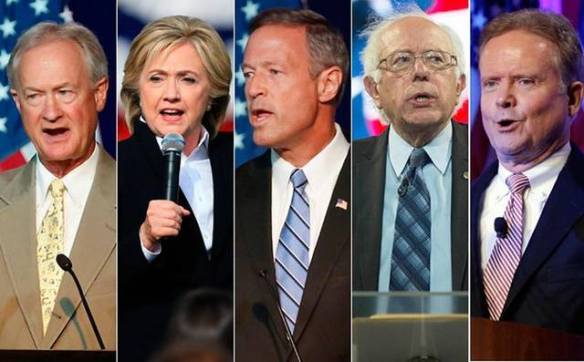 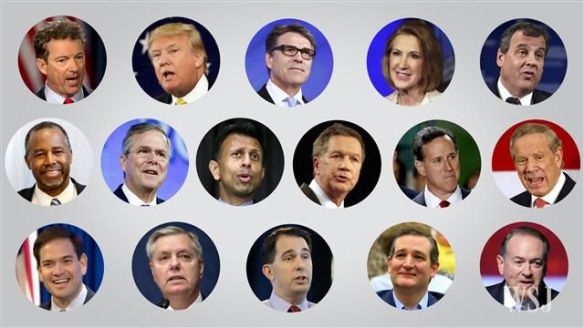 Actually the Republican Party is very diverse. It’s just that Democrats and the mainstream media don’t want this truth to be known. It’s part of their duplicitous strategy to keep African- Americans, and other minorities and women from voting for anyone except Democrats. It’s groupthink strategy. Democratic Party – the party of conformity.

“How is it that the White House links changes in hurricanes today to global warming when the WMO, NOAA and IPCC cannot?” –Chris Landsea, Science and Operations Officer, NOAA’s National Hurricane Center 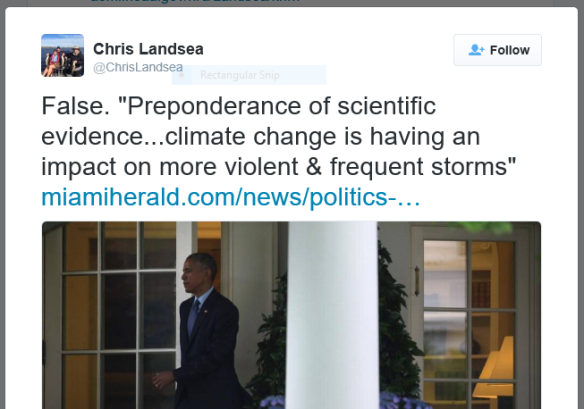 Screen shot of Chris Landsea’s Tweet, May 30, 2015. “Christopher W. Landsea is the Science and Operations Officer at NOAA’s National Hurricane Center (NHC) in Miami. Dr. Landsea received his Bachelor’s Degree in Atmospheric Science from the University of California Los Angeles (1987) and his Master’s Degree and Doctorate in Atmospheric Science from Colorado State University (1991, 1994).” Source: NOAA

White House Press Secretary Josh Earnest: “But what the preponderance of scientific evidence tells us is that climate change is having an impact on more violent and more frequent storms.”

The Truth: There have been fewer tropical cyclones over the last several years. According to Dr. Ryan Maue “5-year running sum of number of global tropical cyclones (1970-2015) Stuck at 400 — lowest in this 45-year record.” Meteorologists call it a “hurricane drought.” A category 3 or higher has not hit the US since 2005 (Wilma) – the longest period since records have been kept, this despite the doomsday predictions and an increase in atmospheric CO2 since 2005.

The climate models President Obama and the EPA rely on for policy decisions do not accurately predict global warming and the extreme weather that is supposed to follow. It is madness to rely on them for policy. Why should political agendas trump actual climate data, which show the models to be wrong?

“The discrepancy between models and observations is not a new issue… just one that is becoming more glaring over time.” –Roy Spencer

“Dr. Spencer’s research has been entirely supported by U.S. government agencies: NASA, NOAA, and DOE. He has never been asked by any oil company to perform any kind of service. Not even Exxon-Mobil.”–Source: http://www.drroyspencer.com/about/

“I think that the immediate efforts to try to link climate change with disaster are in many ways counter-productive.” —Roger Pielke, Jr.

Dr. Pielke is a Professor in the Environmental Studies Program and a Fellow of the Cooperative Institute for Research in Environmental Sciences (CIRES) at the University of Colorado. “In 2012 Roger was awarded an honorary doctorate from Linköping University in Sweden and was also awarded the Public Service Award of the Geological Society of America. Roger also received the Eduard Brückner Prize in Munich, Germany in 2006 for outstanding achievement in interdisciplinary climate research. Before joining the faculty of the University of Colorado, from 1993-2001 Roger was a Scientist at the National Center for Atmospheric Research.” Source: http://sciencepolicy.colorado.edu/about_us/meet_us/roger_pielke/

Today is the swearing in of a new National Assembly in Caracas, Venezuela. Violence in the streets is possible. The socialist revolution has been a dismal failure – it has obliterated the economy of Venezuela, once the wealthiest nation in Latin America. The voters rejected the socialist catastrophe by electing a supermajority of opposition members to the Assembly, but President Maduro is using his allies on the Supreme Court to prevent three members from being sworn in, claiming voter fraud. A crisis is looming large in Venezuela today.

The people of Venezuela desperately need relief from the socialist nightmare. Hopefully this will be a turning point. Meanwhile in America, approximately 40% to 50% of the voters favor more socialism and will vote for the Democratic candidate for President this year.

One Maria Isabel Sanchez  reporting for AFP news has written one of the most ridiculous reports about the crisis in Venezuela. This reporter is either ignorant of the socialist policies that have led to this crisis or she is a socialist partisan masquerading as a journalist.