Earlier this month Islamic State terrorists stormed an old folks home in Yemen run by Mother Teresa’s Sisters of Charity where they murdered at least sixteen people including four nuns and kidnapped Father Tom Uzhunnalil, a native of India. Now it is reported, as has been anticipated due to threats from ISIS, that Father Tom Uzhunnalil was nailed to a cross and crucified to death by the terrorists on Good Friday.

Yet some people continue to believe the propaganda pushed forth by President Obama and others that Islam is a “Religion of Peace.”

Reality is not optional and will always catch up with us. For people who are still vulnerable to the false claim that Islam is a religion of Peace, I suggest they read the February 2016 issue of Imprimis published by Hillsdale. In it, Andrew C. McCarthy explains that the interpretation of Islam that says “strike and kill non-believers” is a mainstream interpretation of Islam. McCarthy was the lead prosecutor that convicted the Blind Sheikh who was the mastermind behind the first World Trade Center attack that killed six  innocent people and injured more than one thousand in 1993.* McCarthy explains “the inconvenient fact” that the Blind Sheikh “was not lying about Islam.”

“When he said Allah enjoined all Muslims to wage jihad until Islamic law was established throughout the world, the scriptures backed him up.”

McCarthy explains that the Blind Sheikh, “Far from being a lunatic, however, he turned out to be a globally renowned scholar- a doctor of Islamic jurisprudence who graduated from al-Azhar University in Cairo, the seat of Sunni Islamic learning for over a millennium. His area of expertise was sharia – Islamic law.”

“The blunt fact of the matter is that, in this contest of competing interpretations, it is the jihadists who seem to be making sense because they have the words of scripture on their side. – it is the others who seem to be dancing on the head of a pin.” 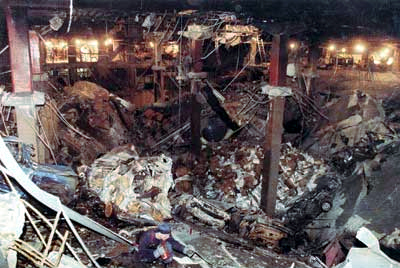 Destruction from the first World Trade Center bombing in 1993 that killed 6 and injured more than 1,000 people. Department of Justice photo.

Mr. McCarthy dispels the foolish notion that Islam can be characterized as a “religion of Peace.” It may be that to some Muslims, but many of their Muslim brethren beg to disagree. Get a copy of Imprimis and read McCarthy’s piece.

However, there is a problem within the religion of Islam itself. That is why there is no talk of a need to do terror surveillance on Lutheran or Baptist churches, or Buddist temples, or Jewish Synagogues in the United States. The longer we pretend to believe that Islam is only a religion of peace as some say, the more we will see the murder of innocent, peace loving non-Muslims as well as many peaceful Muslims.

Furthermore, talk of a moratorium, or a severe limitation on immigration to the United States from predominantly Muslim countries is not an irrational response to what is happening in the world. Think Paris. Think Brussels. Think 9/11.

*The first World Trade Center bombing was intended to topple the North Tower and crash it into the South Tower. Had the terrorist succeeded, they would have killed tens of thousands of innocent people on American soil. Because we as a country did not take the threat from Islamic terrorists seriously, we lost an additional 2,996 innocent people on September 11, 2001. The “head in the sand” mentality allows some to convince themselves that Islam is merely a “religion of peace” can be very deadly indeed.