Of course sexual harassment is real. Powerful people who dangle the carrot of career advancement in trade for sexual favors are scum. It’s even more brutal when some are made to feel “You’ll go nowhere unless…”  There is also plenty of mid-level and lower-level sexual misconduct. So it is real, and happens every day all over the globe. The victims are mainly women. But there are also extortionists, opportunists, gold diggers and groupies. They are not victims. That said, it seems like everyone in the main stream media is jumping over one another to be the first report “sexual misconduct” allegations against any TV personality or otherwise famous person. Something is fishy. Perhaps it’s the stench of rotten hypocrisy, for this was the same left wing media that back in the day tried to suppress allegations against their man in the Whitehouse, Bill Clinton, aka. “Slick Willie.” OK, it may not be exactly the same media, but close enough. It’s less about individuals than it is about a pervasive ideology. The media groupthink is popping up again and manifesting itself in the latest mutation. 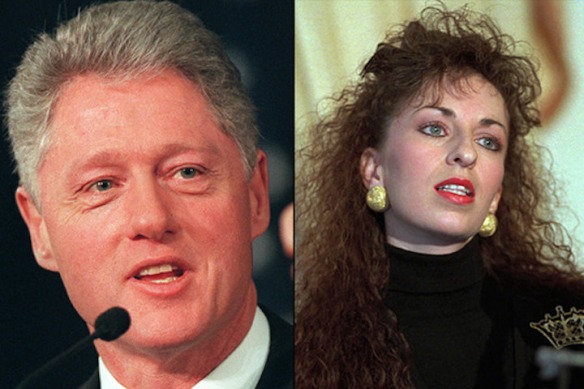 Those who have been following the double standards of the left have seen this dishonesty going on for decades. It’s why many of us don’t trust the main stream media. If something impedes their left-wing agenda (think any rascally Republican person or policy) it is portrayed as bad or inexcusable. If something helps advance their liberal goals (think president Clinton in 1998) it is portrayed as good, defendable. Right, wrong do not really matter when one distills it down. Bill Clinton IS the poster child for this double standard.

If they do decide to finally throw the Bill Clinton under the bus for “sexual misconduct” it will not truly be done on the basis of a moral failing or a lack of virtue, for those concepts do not exist in the liberal atheist’s mind.* Besides, it’s too late for that. It will be done because Hillary lost and it has been decided that she should be “retired.” Senator Al Frankenstein may yet still survive. After all, one should not hold a former SNL comic to very high standards. Once a buffoon always a buffoon. Their fate depends on what is decided behind locked doors in the newsrooms. Who is expendable and who is not. But there are Young Turks (of the female persuasion) in those newsrooms now. They will increasingly have influence.

Though pretty soon, there will be few remaining to accuse. It’s a bit much, I think. However, anything that causes this kind of twisting and squirming among the liberal ranks and reveals their hypocrisy is amusing to watch.

As a result of this media tempest, perhaps inappropriate romantic flings will become a relic of the past, perhaps not. In the future perhaps permission to “make a pass” will have to be done in the presence of witnesses. Wordy contracts will have to be signed prior to the commencement of any affair. So much for spontaneity.  New academic departments will be established at public Universities to explore what constitutes a “proper advance” towards the opposite sex. Perhaps sexual edicts will be added to the Code of Federal Regulations by the next Democrat-controlled Congress. Senator John Conyers – should be the chairman of the committee, Al Frankenstein his co-chair.

*I never once believed Bill Clinton should have been impeached for sexual misconduct. There were simply too many other reasons why he could have been convicted for real high crimes, like accepting Chinese money for his presidential campaign, and then allowing the transfer of missile technology to, guess who… the Chinese.