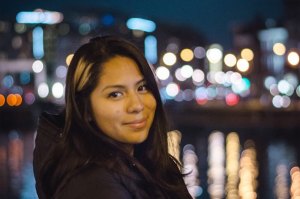 This beautiful, young American, Nohemi Gonzalez, was murdered in cold blood on November 13th in Paris by ISIS terrorists.

On Thursday, November 12th, President Obama told ABC News anchor George Stephanopoulos that ISIS is “contained.” The very next day, in Paris, France heavily armed ISIS terrorists went on a rampage and killed at least 129 innocent people and wounded about 350 others. 99 of those wounded are in critical condition. Once again, President Obama has been caught trying to deceive not just the American people, but the entire world. Remember, it was this foolish man, the man who has been entrusted with more power than anyone to combat world terrorism, who in 2014 referred to ISIS as “J.V.” or Junior Varsity.* It is true to say that the Obama Administration’s effort to deflect from its failure to protect American lives in Benghazi, was done simply to avoid losing an election.

This incompetent leader spends so much time covering up his failures. The result of his deception is that too many unthinking Americans and Obama supporters have been lulled into a false sense of security. This can only happen in a society where a large part of the media is corrupted and complicit in the deception. Propaganda is used by the likes of MSNBC, CNN, Politico, Huffington Post, Media Matters, Thinkprogress.org, The New York Times and other “news” outlets to conceal the truth about the state of our nation.

President Obama is now welcoming Syrian refugees into the United States. And with all that is going on in the world he refuses to seal America’s borders. How is this a good thing? Wake up people, before it’s too late.

Although Barack Obama’s last day as President won’t come soon enough, it won’t really matter unless we elect a more competent, and honest person to be our next President. That certainly excludes, Bernie Sanders and Hillary Clinton.

Hats off to the Washington Post which did see fit to award President Obama with four Pinnochios for trying to mislead people about what he had previously said about ISIS. It brings a glimmer of hope that there may still be some in the news business with integrity even at liberal-leaning Washington Post.