Your letter of the 4th reached me this morning – and as it states that you are all well, was productive of much pleasure.

I have been to Kingston, (Canada) with a Flag of Truce, and have therefore had an opportunity of seeing some of our Enemies. The rest of the men enlisted in your neighborhood are all well except Andrew Aston, who had his feet froze on the march to this place….

I shall send enclosed in this letter a certificate of the pay due Charles Wilson at the time of his death.- The Certificate must be presented at the War Office, in Washington City for payment. Their best way will be to get Grandfather Lambert, to carry it on when he goes to Washington again.

…We are now living in small Log huts without, chimneys, or windows, and you will judge from this description, that they are not quite so comfortable as the generality of the Houses in your country. However we have got use to this mode of living and can be as cheerful here as in the best quarters in the world. We now have very fine fish in abundance that are caught in these Lakes.

Lieut. Runk is now at this place in good health. He appears to be too lazy to write as I have frequently wished him to do- He told me today he had written but one letter since he left home. Give my love to Susan and William. My respects to Grandfather Lambert Grandfather Hoppock and all enquiring friends and relations. Tell Maria and the Girls in the neighborhood that I frequently think of the many fine frolics we had once, and that I hope to be amongst them again  to torment them as much as lays in  my power. Tell Wm Prall, that I shall write him again as soon as we give our British friends one good Drubbing. Wishing you and all our friends may enjoy good health, I remain Yours Affectionately

P.S. We have this day received orders to embark, on board the ships tomorrow – what is to be our place of destination, or our fate, time alone can determine. Goodbye.

“Let my fate be what it may, I assure you that my name shall not be coupled with that of Dishonor, nor shall my friends ever blush with shame that they assisted me in procuring my present appointment.” —John L. Hoppock November 17, 1812 , Captain 15th Regiment U. S. Infantry

Pike’s Oath: “We solemnly swear, that we will defend this standard against all the enemies of our country, and that we will never desert it in the field of battle or hour of danger, so help us God.”

Extract from a Letter from Lieut. Fraser, Aide de Camp. to Brigadier- General Pike, Published in the Aurora, of Philadelphia, May, 1813: 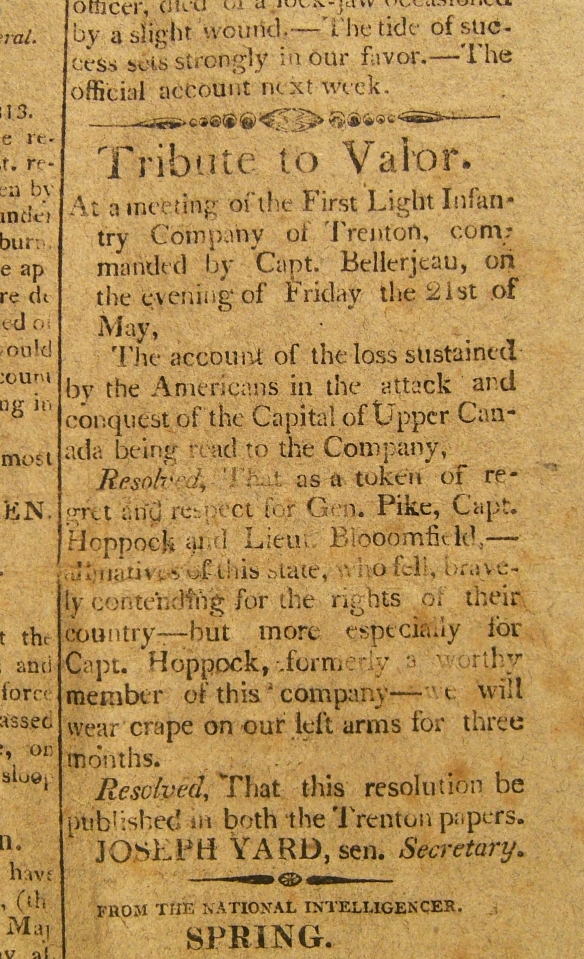 The Capture of York:

Return of Killed, Wounded, Prisoners and Missing of the (British) Troops at York under the Command of Major-General Sir Roger Hale Sheaffe, on the 27th (April):

NAMES OF OFFICERS KILLED AND WOUNDED.